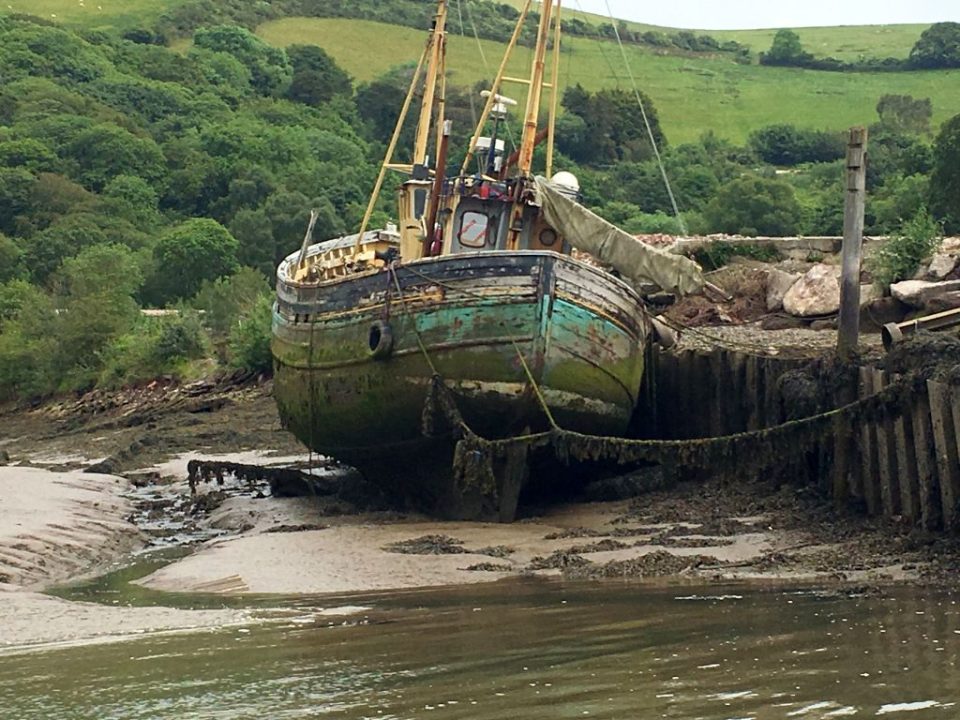 Demolition of the Rose of Sharon by Gilpin Demolition

The Rose of Sharon Fishing Trawler

The vessel always fished from Newlyn, at the time, fishing for ling, skate and pollack.

The Rose of Sharon (ROS) was approx. 20ms in length.

The vessel had been re-floated and moved to the slipway where it was laid partially on its starboard side against the banking. The River Dart runs to the North, cleared land to the East and South (top of slip) and Noss Marina is to the West

The project duration for Gilpin Boat Demolition was estimated to take 5 days to dismantle, load to disposal bins and clear site – subject to tidal and weather accessibility.

The vessel was positioned to the North of the site on the redundant concrete slip by Gilpin Demolition. The vessel was protected by the installation of a floating boom to prevent spread of fluid or loose debris.

The Gilpin Team, cleared the boom on a shift by shift basis.

All required environmental “boat breaking” checks, testing and verifications of potentially contaminating materials in or on the vessel were undertaken by Gilpin prior to moving and prior to deconstruction.

Gilpin Demolition deployed two demolition excavators in the deconstruction process. The team worked in tandem to parbuckle the boat initially and then undertake the breaking.

Gilpin’s FUCHS excavator was able to reach into the hull and gently remove all internal components including bulk heads, pipe work, tanks, engine and soft waste materials such as timber lining, flooring etc. Gilpin’s team then loaded the waste onto bulkers and removed from demolition site.

Permit to work system was utilised for certain high-risk activities that include asbestos, confined spaces, demolition/dismantling and hot works. The Gilpin Site Manager ensured the relevant permit was issued and communicated to relevant persons prior to works.

All works undertaken by Gilpin Boat Demolition was planned and the team completed works to an excellent standard leaving the site clear.